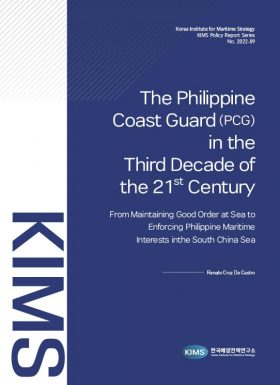 This chapter examines the role that the Philippine Coast Guard (PCG), the primary enforcer of Philippine maritime rights in the South China Sea, has assumed since the 2012 Scarborough Shoal standoff. It has been observed that changes in the Philippine government’s policy on the South China Sea dispute have affected the PCG in performing this role. During the administration of President Benigno Aquino III, the PCG took on the task of being the white hull instrument in maintaining Philippine presence in the South China Sea. During the administration of President Rodrigo Roa Duterte, the PCG was utilized to foster cooperation with China in managing the dispute. The PCG was also deployed to the Sulu-Sulawesi Seas and, in light of the 2017 siege of Marawi City by Islamic militants, it assumed new responsibilities related to counterterrorism. Recently, with the failure of the Duterte Administration’s appeasement policy on China, the PCG returned to its role as the primary enforcer of the Philippines’ maritime interests. In conclusion, the study explores how domestic and international developments are affecting the PCG as the lead enforcer of Philippine maritime interests and entitlements in the South China Sea in particular, and in the Indo-Pacific region in general.